Holy cow, Tyren’s robot birthday party went REALLY well! Funny because I think I felt the least prepared for this one than any of them. Typically I start planning months in advance and even order a bunch of stuff online…which I wish I had because I couldn’t find ANYTHING robot in the stores here locally. (I’ll post to some things I found online in another post for those that might want to actually plan ahead.)

I’m going to write up everything we did here so that others can possibly use the ideas for their own robot parties…since I gathered most of the ideas from other sites for US! I couldn’t have done this party without all the great ideas on the web…I was really at a loss for my own ideas for this theme, which I know nothing about! So a great big THANK YOU for all the sites out there that put out their own ideas to share…and I’ll link to the pages I got the ideas from so that they will get the credit (and the traffic), and hope that others will do the same for ideas they got from me! 🙂  Also will be uploading the graphics we used for our labels as soon as Adam gives them to me because I was able to come up with some of these things from other people’s files that THEY put on their blogs, so I want to share the files with others, of course! 🙂 (My husband made all our personalized ones with photoshop, he’s a whiz with that thing!)

Of course, things went badly with the prep for pics/video…we were so hard working on the party that we never ended up getting the camera and video camera ready to go and couldn’t find them through most of the party! Ended up finding the video camera halfway through and handed it to Adam and then it was a tape that was FULL! He finally did get a tape and got some footage but by then it was already getting dark. I’ll dig that up and post that soon as I figure out how to do it.

For photos, thank god my brother brought his camera! Hopefully he got a lot of great pics because I didn’t ever end up finding our camera. I’ll add the pics to this post once I have them. Today I finally found our still camera and was able to take pics of some of the things from the party.

SOOOO, without further ado… here’s what we did…

Outside the party we set the mood by putting up a sign, which my brother made for us: 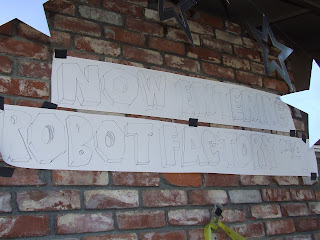 Also a bunch of hanging silver stars that I got in a package of silver decor from a party store. Guests had to walk under a big archway robot made out of silver spray painted cardboard box robot (pics of that to come…I know my brother Tim took pics of that magnificent thing because he put HOURS of work into it, outside in the hottest part of the day, in direct sunlight!! He’s a trouper!) And Adam put up caution tape in long strips in the sliding glass doorway (don’t have a picture of that, as it was torn down this morning when I finally found the camera…but I’m hoping Tim got a pic of the entrance).

Inside, we put out toys that Tyren got for his birthday: 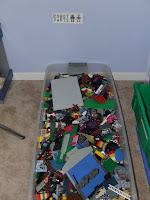 Fisher Price Imaginext Robot police sets (pictured to the left…they are AWESOME!!), so those were out to play with (although I don’t know if anyone ended up using them). And the toy area of our new “big room” was all set up and inviting to play. Put a sign on the wall above the legos that said “Robot Parts” (right).

The main activity of the party was robot making with recyclables…I had a ton of recyclables I’d been collecting, that we had for The Learning Village that I snagged to use for the party…all of them will go back to TLV now that the party’s over. So I put out these big roll-y cart things we have: 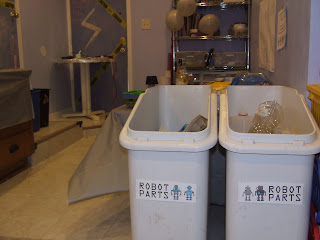 I also grabbed a bunch of the art supplies from TLV (since I had purchased nearly all of them myself and donated)…so for the “Robot Assembly” table (big sign above it that said those words that Maeven made, with pics of robots on the letters.) I put out what I had: colored pipe cleaners, straws, googly eyes, sequins, beads, wooden and foam shapes, colored popsicle sticks, buttons, etc…And I purchased a bunch of large nuts/bolts/wingnuts/washers in various sizes to add to it as well as silver pipe cleaners, rubber bands, paper clips, aluminum foil, and these tiny chinese food container type things that I got at Dollar Tree. Actually a lot of what I bought I got at Dollar Tree. I put out small bottles of white glue, scotch tape, staplers, scissors, hole punches, and hot glue guns. 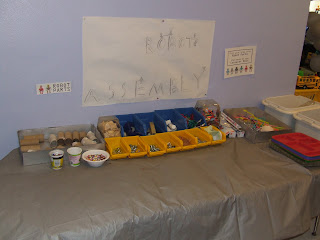 So the kids arrived and were shown the Robot Assembly area and spent pretty much the entire party working on their robots. And WOW there were some incredibly creative ones made! All ages seemed to REALLY get into this activity! (12 kids came to the party! We invited a bunch of our neighbors because for the first time we are actually getting to know them lately!) Hopefully my brother got pictures of the conveyor belt with all the finished robots, because the kids took them all home and I didn’t get pics of them. 🙁  All I got were pics of what was left this morning…including the awesome robot Maeven made (below).

To set the mood in this area, I put a plastic silver table cloth I got from a party store, on the main table, and on this long/low dresser thing I have in there. Also put a long strip of black burlap that my husband had scraps of from another project. This was our “conveyor belt”: 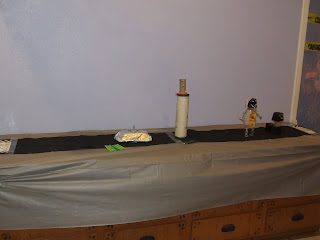 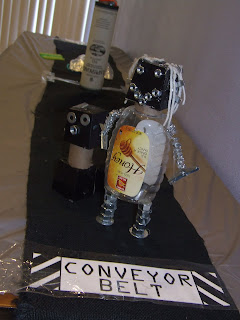 There were also a bunch of small, sectioned lunch trays on the assembly table and a sign above it that said “Fill your tray with robot parts, then move to the conveyor belt.” I also had a small round table from outside that I set up in the corner covered in aluminum foil (the top was pretty dirty from being outside) with aluminum foil, and that was the glue gun table, separate from the rest. 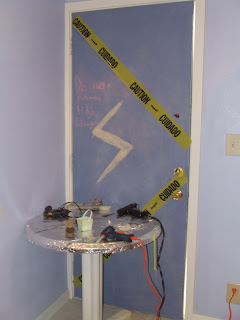 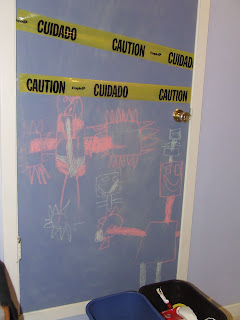 In this art/robot assembly area we also have 2 doors (since this is the area of the room w/linoleum that is by the back door and laundry room, which is our designated “art area” in the room.) that are painted in chalkboard paint, so I had my kids draw robots and messages on the doors, and Adam put caution tape across them so no one would open them.

In the kitchen, which opens to the “big room”, I had silver plastic table cloths set up on kitchen table and our portable dishwasher. The dishwasher was the drink area, with a label saying “cyber juice” (an idea I got from here.) for the main drink container of lemonade, and I put silver colored cups (which had a texture on them that looked sorta robot-like to me) and silver napkins on there with a bunch of clear colored juices from Trader Joe’s out there too (we have new carpet in the “big room” and wanted to avoid stains from colored punch), with an ice chest of ice. I also used my label maker to put the message “please label your cup” (since I had put out a permanent marker) on the table cloth in front of the cups, and “Ice in ice chest below” with an arrow pointing towards the chest. 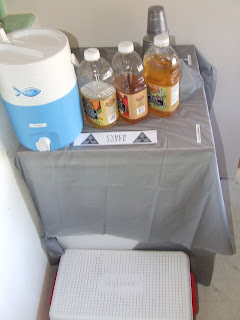 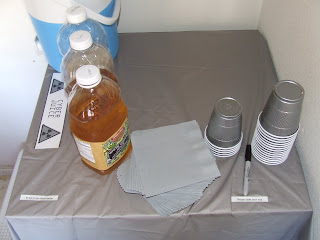 For the snack table, I asked my brother to make a sign to say “Robot Refueling Station”. Look what he came up with!: 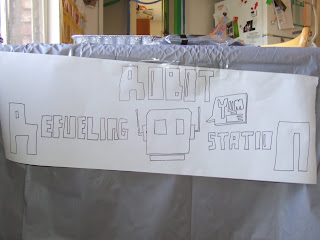 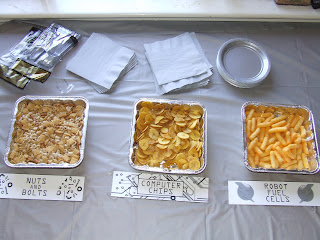 I’ll post the images for the labels when Adam gives them to me. The ideas for these snacks and labels came from here.

Most of the party was just the robot making and playing with toys and eating snacks…We also had a way cool robot cake that my mother-in-law made which I will post pictures of once I get…and of course ice cream and gift opening.

Oh almost forgot…I made a cd that was a mix of robot music I got from itunes and birthday songs I’ve had for years that I downloaded off the net years ago (plus some I bought). I alternated robot song with birthday song in the middle of the cd, This was playing outside on a boombox for the whole party, and Adam set up his new office (which is inside the “big room”) to play another cd of robot-y music that my brother put together for us (THANKS FOR EVERYTHING, TIM!!! YOU ROCK!!!) and a short video Adam had edited of clips of robot movies/shows/etc that he found all over the net, playing on his multiple computer screens at his edit station.

Here’s my itunes playlist that I burned to a cd:

Somehow all that equaled exactly 1 hour in music! I deliberately put some of the more mellow robot songs in a clump at the beginning (to play as guests were arriving) and then in the middle alternated with more up-beat robot songs and upbeat birthday songs, then a couple robot songs at the end.

Also, the entire big room was decorated with tons of helium filled silver balloons and silver decorations I got in a pack from a party store. Hanging stars and curtains of silver fringe and such. Very cute stuff! We were trying to make it feel like a robot factory but at the same time have that birthday party feel still. I think we succeeded pretty well! 🙂

The party was at 7pm because its stinkin hot here in the summer until after that time, and lasted til after 9pm. We had borrowed some chairs from family and set up a big circle of chairs outside in the front driveway in front of the house, outside the entrance to the big room. So most of the people ended up hanging out there, as it cooled off (it was hot still at 7pm, til the sun finally went below our neighbor’s house)…and we had borrowed 2 robot toys from The Learning Village lending library, a robot dog: 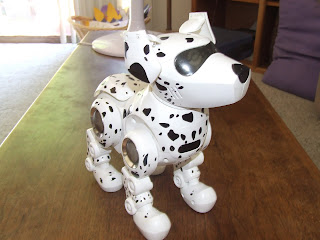 and a robot dinosaur: 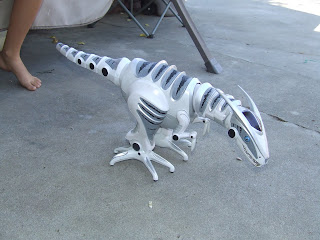 I didn’t plan at all for these things…we went to TLV to pick up all the art supplies and Tyr wanted to check something out from the lending library and asked for one of them and I was like YES!! OMG YES! Those will be GREAT for the party! So the kids took turns using the remotes for these things (I had to buy new batteries, but it was so worth it!) and they were walking and dancing all throughout the middle of the big circle of people through the whole party. VERY VERY COOL! These are the sort of toys I would never actually buy…but checking them out for free as a member of TLV…PRICELESS!!

Here’s a video of the dinosaur robot I made this morning with Maeven:

That’s all I can think of or have time for now…More pics to come, as I get them.