i just realized i talked about the stress of xmas, the prep and the roof caving in…but didn’t really detail how our actual family time went…

let’s see…normally we do xmas eve at adam’s dad’s house (his parents are divorced), and then to church with my family….then xmas day usually is here at our home for the morning, then off to my parents for a few hours then off to his sister’s or mom’s house to celebrate the rest with the majority of his family (where all his siblings and families usually are).

this year, his dad recently broke up with his girlfriend and moved (fairly recently), and didn’t have us over because he has a tiny little place now. (usually his dad and girlfriend, our 4, and adam’s sister and her 3 kids and husband, so its not a tiny gathering…not enough room, even without the girlfriend). so that was one less place to have to go because instead, fred (adam’s dad) came to his daughter (alisa, adam’s sister)’s house. alisa decided it would work best to do the whole family thing (adam’s side) at her place on xmas eve, because her husband’s daughter (alisa’s stepdaughter) was only there on xmas eve day, til 8pm. so we went to alisa’s for xmas eve…made it there sometime after 5pm. (we were really late because of a bunch of things…including adam having to work later than planned, and my homemade gifts taking longer than planned, our son being impossible to get moving, tantrums galore, and…the roof caving in at just the right moment….ahhh, xmas!) canceled church with my family at the last minute…i explained it in that same roof caving in post….so we were at alisa’s for like 3hours or so. opened lots of gifts and had a wonderful time! lots of joy and love and happiness abounded! let’s see how many people were there?
adam, me, tyren, maeven, andrew (adam’s younger brother/my kids’ uncle), ian (andrew’s son/my kids’ cousin), jack (andrew’s son/my kids’ cousin), kat (jack’s mom/andrew’s girlfriend), alisa (adam’s sister/my kids’ aunt), rob (alisa’s husband/my kids’ uncle), maddy (rob’s daughter/my kids’ step cousin), mando/monique/amanda (alisa’s 3 kids/my kids’ cousins), eloise (adam’s mom/my kids’ gramma), fred (adam’s dad/my kids’ grampa), then all of rob’s family…don’t know any of their names but i know his dad and mom and his dad’s wife and his brother and sister and brother’s girlfriend were all there….and i may have missed some people…have to check the pics later when adam gives them to me to upload to my computer (i keep buggin him about it and he’s not given them to me yet!)

then home again…kids sleepy but of course tyr didn’t actually fall asleep in the car as i had hoped. luckily there were cookies to snag at auntie’s house, so i didn’t have to stay up late to bake cookies for santa…because i was already up LATE for other reasons, as you’ll see…

maeven got her letter to santa and tyren’s letter to santa ready with the milk and cookies…set on a tray near the tree…quickly into her pjs and off to bed where she read us the story “twas the night before christmas” entirely herself with NO help! she’s quite the reader now! she didn’t even stumble! (can you say “proud mama”!!) lots of interruptions from tyren, but still a special moment and adam got it on video…which i’ll have to ask him for that video later too….have him edit me a short version of it.

then off to bed…well, maeven…and tyren continued to drive me NUTS since he was WIRED until he FINALLY fell asleep at 12:30AM!!!! oh i was PISSED, lemme tell ya! i had still ALL my wrapping and stocking stuffing and such to do and that darn child WOULDN’T GO TO SLEEP!! but finally he did. oh and i put out the kids’ shoes with dry oats (oatmeal) and carrots, for the reindeers…because maeven asked me to cuz she needed to get to bed…took pictures of it too! just don’t have those pics yet. but here’s the after pics: 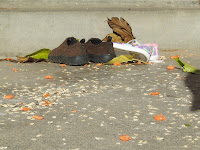 those reindeer are always QUITE messy! 🙂
plus it got quite windy on xmas day! hence, the leaves.

so then after i got tyren off to bed, i was FINALLY able to get all MY work done (couldn’t do any of it while tyr was still up! and adam kept falling asleep on the couch, so i couldn’t just disappear in the office to wrap gifts, cuz he wasn’t supervising the munchkin who always needs serious supervision cuz he gets into EVERYTHING!) so i think i was finally in bed after like 1:30am or something like that…and it rained hard all night! so that really was a nice sound to sleep to! 🙂

woke up xmas morning to maeven…not til like 8:30am…my kids just don’t wake up early for nuthin, i tell ya! LOL! just read a blog where the kids woke them up at 5am…i cannot even imagine either of my kids being alive at that time!! LOL! and tyren had to be woken up! he fought it too!! we kept telling him that santa had come but he was like “noooo, i hate christmas!!!” LOL! that’s his word for everything he doesn’t feel like doing these days…he will “hate” it, or its “stupid”. he kept telling us that nana and bompa’s house was “stupid” and he “hated” gifts…because he didn’t want to go. same thing for auntie alisa’s house. ah, such fun. he got over it, thankfully. he usually does eventually. he’s just stubborn these days when he doesn’t want to do something…and he doesn’t want to leave the house these days, even for christmas gifts!

anyway….did the stocking and gifts here at the house…kids were happy, mommy and daddy were happy…we had a nice time…and then we got a little food in the kids and i started working on finishing presents for MY family (which i hadn’t had a time to work on the day before because i was so busy working on adam’s family’s)…spent HOURS finishing those up…then rushed to get ready and everything wrapped and packed and out the door…were supposed to be to my parents by 2, made it there closer to 3 i think…still not too bad. spent the rest of the afternoon, into the evening there. i think it was around 8 or so when we left.

nice time with my parents and brother…and i DO have some pics of that time (cuz it was still on the camera, and i was able to download those myself! the others are already on adam’s computer and he has to burn a disk for me to get those)… 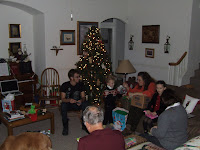 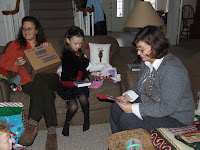 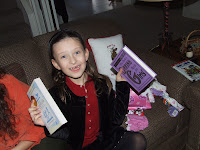 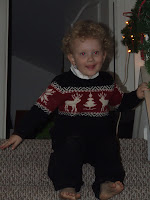 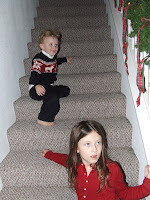 playing on the stairs (while watching a movie my bro projected onto the living room wall…hence, what my kids were looking at in that second pic.) 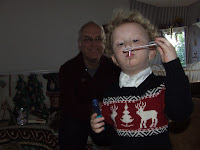 blowing bubbles (hey! i didn’t even realize he got these!!) 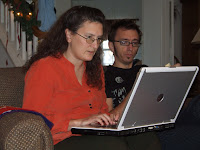 working hard at adding antivirus/spyware programs to my dad’s laptop…no really, that’s what we were doing!! or maybe that was when i was showing tim my online photo album…something like that…LOL

we had a really nice time!! ate salami and cheese and crackers and just chilled the rest of the day away. very nice. 🙂

it was a good christmas, overall! and today we got up and busted butt cleaning our house! woohoo! got a good start on taking down the mess!! more tomorrow!!