ok, things could be worse. i KNOW that people have it worse out there…but i have found that i tend to feel better about bad situations once i vent about them…so here goes…

ok so i mentioned before how adam got a 10% pay cut, right? well, now here’s the thing…its kinda confusing, so bear with me here…

he’s maxed out on vacation time…he never uses it! so he’s got 3weeks paid vacation on the books which now he cannot use because, guess what? business is SLAMMED at his work right now…which is good, right? that they are making money again? well its still going to take awhile before they are back in the positive…they have been keeping the biz alive using credit for awhile, so its good that business is hopping, but that doesn’t mean adam will go back to normal pay anytime soon…

and in the meantime…we CAN’T GET FRIGGIN WIC BECAUSE OF THAT VACATION PAY ON THE BOOKS!!! they don’t go by what he’s making NOW, they go by the past year, which is on the paystub, including that chunk of unused vacation time!

so, without that vacation pay, we’d totally qualify for WIC…we qualified before his pay cut!! but that damned vacation pay, which he cannot get anytime soon, is stopping us from getting free food from WIC!!! food we could definitely use.

and to top things off…we still have a house in chaos because its taking FOREVER to remodel our “big room”… i’ve blogged about it before…the room had all kinds of stuff…it was our playroom/school room so there was a TON of stuff in there…stuff i have really wanted access to ever since, but haven’t for going on a year and a half now! stuff that is piled up in garbage bags because it still is covered in toxic mold spores, so i cannot take them out of bags until its been cleaned with mold killer…but i cannot do that yet until i have A PLACE TO PUT ALL THE STUFF! and the room still looks like this: 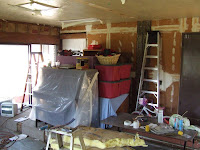 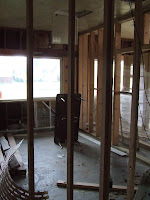 so obviously unusable. so the stuff is still piled up next to my side of the bed in the bedroom and packed into the shed (i have a really hard time getting in there to get anything since its all full of garbage bags of stuff). and of course my kids keep asking for stuff that we cannot access cuz its in a garbage bag somewhere (god knows which one!)

anyway, the person that was helping us fix up the room did a bang up job and got all the major jobs done. despite how it looks…its come a LONG way…the new windows are all in, the walls for adam’s office are up (the frames at least)…oh did i mention that while we were remodeling we figured it was time for tyren to have his own bedroom? so we have 3 bedrooms but one of the rooms is adam’s office…full of his video equipment which bring us in a little extra cash here and there, so are very important…

tyren doesn’t yet have a space of his own…so we figured while we were working on the big room, we’d use part of it for a new office for adam so that tyr could have his own room finally. (not that he’ll sleep in it anytime soon, but he does need his own space…especially since he’s banned from maeven’s room). hence, the new walls.

anyway….so we are VERY grateful for all the work that has been already done. but its not done yet. nothing’s livable yet. and now we just found out he won’t be able to help us anymore. *sigh* ok, adam panicked big time but i actually remained pretty calm…i mean all the big stuff has already been done…if he just helps to install the door to adam’s office (which he mentioned he might be able to still do for us) and maybe finish the stucco on the outside of the house, we might be able to handle the rest ourselves. hopefully. i think we can. it will all be a learning experience for us since we’ve never put up drywall and such. but it has been getting harder and harder for our helper to find time to help us anyway…weeks going by with no word, and we don’t really like to impose on his life (even though he does owe us money, we never wanted to make the situation unpleasant). so maybe now we can get the job done faster, who knows? i’m just trying to think positively under tremendous amounts of bad situation all around us.

ok, so one of the reasons we were having this person do our room for us is that they owe us a chunk of money. so he was working it off…also he’s a kind person to offer to help us! so by his no longer working for us, they still owe us a chunk…some was paid off with the work he did, but not all…and since WE had to borrow money to purchase supplies to finish the room (all our money is now gone…various things kept popping up…and the original money we loaned out to a couple family members over a year ago was the money that we had for fixing up the big room in the first place!!) and that borrowed money was only to cover the supplies, not the labor because we thought we had the labor covered…we were initially pretty upset (ok so it still is not a happy situation, but all will be fine)…anyway…we still don’t know if we’ll have enough to complete the job…but i have high hopes that all will be well eventually…if i can just convince my stress-prone, negative thinking husband!

here’s the sort of amusing part…we are a one income family…who makes less than one income of many of the 2-income families out there. seriously, i mean we would qualify for WIC and medi-cal, if it weren’t for that unaccessable vacation money! so income-wise, we are poor by government standards (but don’t think that we really feel poor, because i know we still have things much better than many people out there…just going by the numbers). and we are not a super thrifty/frugal family!

i think the only reason we are doing ok is because my parents let us use their van (no payments there, yet)…our other car is paid off….we have no credit card debt (we never had a huge amount, because we’ve always tried not to use them much, but we did have some that was paid off when we re-mortgaged our house and took a chunk of cash out to buy adam’s business equipment and pay off all our debt except the mortgage)…we don’t have lots of extras…no cable tv (but we do have cell phones and dsl for our computers…but the bare minimum available)…we don’t spend a lot on things like clothes or things for our house…we rarely spend money on anything other than actual NEEDS actually…all of my kids clothes are hand-me-downs or purchased by family. i can’t remember the last time i bought my kids any clothes.

and so we’re actually doing pretty ok. we definitely don’t live outside our means…we do eat out far too much, but that’s like taco bell and such…we try to eat cheap when we do…and its been cut back greatly lately (hoping to cut it out completely soon…but we still HATE to cook and HATE to go grocery shopping, so that makes it hard…)

i mean, we are definitely not “well off”…my son is still wearing his 3T winter coat (way too small) because i cannot afford to buy him a new one right now (actually the next thing i’m going to do is post to my mommy group and see if anyone has one they can spare to give up for him…we are all about hand-me-downs, i tell ya!) the only shoes my kids own are because of nana (she’s a bit shoe-happy)…and actually many of them are going to good will because they’ve outgrown so many. maeven has drawers FULL of clothes because of hand-me-downs (thank god!) and tyren is doing ok because of my mom buying things for him when he needs them…although the coat and long sleeved shirts are next on our list of things he needs…he’s doing ok. could be worse.

and adam and i get clothes frequently for birthdays/xmas so we are doing mostly fine in that dept. hell, adam has a closet JAMMED FULL OF SHIRTS because he always gets shirts for gifts! but that’s a good thing cuz he does wear them out fast.

and i made about $250 for our xmas this year since we know that besides adam’s pay cut we won’t be getting his bonus (usually about $1000 and more than covers xmas and all the current bills) so i ran an event and have been trying to do all i can with my websites so that i can make money for xmas…and now we are down to just $130 left of that xmas money cuz of various expenses, the biggest of which was our $75 car registration which i had to use xmas money to pay cuz we didn’t have it elsewhere. so xmas is going to be tight this year. we’re trying to keep all gifts under $20…and are making as much as we can to save further money.

*sigh* anyway…i think i’ve vented enough…you get the gist. we have had bad situations come up recently, but it’s all going to be ok. it always is. i know this. and i feel better now that i’ve gotten it all out.

if you made it this far, thanks for “listening”. 🙂

when all else fails, i have to remind myself that i know of people that have things worse, this mom, for example. 🙁