i’m going to change the subject from my current life for a bit…i have had a lot of opportunities to do some major reminiscing lately, due to reconnecting with old friends of high school and college days…

recently i’ve been thinking here and there about past relationships i had and the kindness or lack there of of the guys from my past.

first of all, i have to say that my husband, adam: 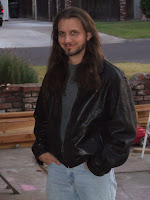 besides being one hot looking dude (i’m still weak in the knees when he wears his hair down like this) is HANDS DOWN the kindest, most giving and loving guy i EVER dated (and later, married!!) from the very beginning and still to this day his kindness and love warms my soul. must be why i married him, huh?

but today what i’m thinking about, strangely enough, is a couple past boyfriends i had…i just had a realization about something that i thought was sorta amusing.

i never had a lot of emotions surrounding my memories of my first boyfriend, chris, from high school. it was a very short relationship (the boyfriend/girlfriend part…we were still friends hanging in the same gang of friends for some time prior to our relationship and some time after) …never amounted to much and didn’t really get any real feelings caught up in it. my next boyfriend, the next year (still in high school), marc…i had a LOT of feelings wrapped up in…but in retrospect it didn’t have a whole lot to it either. especially since after the fact i learned he cheated on me quite a bit…but i digress….

next boyfriend, a couple years later, my junior year in college, todd. this one had depth to it and many real feelings. it also went bad, but we did have a lot of really great memories and i’ve reconnected with todd (first found him around 2001 or so, i think…and we email back and forth a couple times here and there, sometimes a couple years will go by, sometimes a couple months…nothing regular) recently we’ve reconnected (WITH adam’s knowledge…i would never go behind his back on anything) and i’ve had a chance to get a glimpse into the sort of man he’s become. (he was just 17 when we met and started dating…barely 21, i think, when we no longer were in each other’s lives…he’s 36 now.)

i’ve also reconnected with marc and chris, briefly. but haven’t really gotten any feel for who they are now. nor do i really care much, honestly. although i wouldn’t mind learning a little more about marc…but he always was pretty much a closed book.

ok so what i’m getting at…i don’t have any real strong feelings tied to my memories of chris….todd, on the other hand, for years, i had very strong, negative, very painful, emotions tied to his memory. marc too, but not as strong once i matured enough to see the relationship for what it was, which wasn’t much.

so here’s the thing…i’ve just realized that chris actually was never all that nice of a person. he was always the “leader” of our pack of friends, which i was a part of for my sophomore and junior year of high school…only part of senior year, as we had a rift occur during that year which i won’t go into now…and we only hung out minimally after high school, after the rift was mended. anyway i’m starting to realize that the guy i never had real bad feelings about really wasn’t ever kind, that i recall. todd, on the other hand, someone whom i had very strong, negative feelings about for a long time (he was practically the devil incarnate in my mind for some years after we split up…it was that ugly) …turns out he actually, now that i can look at him without all the emotions clouding me, actually had quite a lot of kindness about him. and turns out he seems to be quite the kind and thoughtful and soulful man today. from what i can tell from his emails, he’s matured quite nicely. he’s even apologized and expressed remorse over how bad things went between us.

so the good is the bad and the bad is the good. the more i think about memories of chris…i just think less and less of him. although i admit this was all high school and people do change. i have no idea how he is now. don’t get any sense of anything from emails from him. but then we never connected deep enough for us to share memories like i share with todd. and the more i reconnect with todd, the more i realize that he really did always have a good heart and i’m so happy to see that he finally grew up to the point of being worthy of a serious relationship.

i don’t think he really knew what to do with me. i think he was too young to know what to do with someone as serious as me…relationship-wise. he wasn’t ready. and that’s ok. because he finally found his soul mate, and married her and they are living happily ever after and i’m really very happy for both of them. its nice to see how he turned out.

and me? i’m living my happily ever after as well. now, that doesn’t mean that there aren’t bumps in the road. if you have read my blog for any length of time, you know that there are quite often a LOT of bumps in the road. and my relationship with adam is far from perfect. and at times, even quite strained. but i never doubt that he loves me, i never doubt that he’s a good man…i never doubt that we can’t always make it work, somehow. we’ve already been through quite a lot together…the worst of which was the loss of our son, baelin. i told todd in a recent email that i figure since we (adam and i) were able to make it through that together, and still come out strong in our relationship that we can pretty much handle anything. but good heavens, i hope we don’t ever have to deal with anything huge like that again!!!

anyway, i just was thinking and wanted to write my thoughts down. i still have a ton of stuff to get ready for xmas, but i’m starting to feel like i’ve got most of it covered and it will all work itself out.

and adam is out of the intense stress of last week’s deadlines for work (and way too many work hours) thank heavens. so i think we’ll be able to actually enjoy ourselves now. 🙂 gotta get the cameras ready for the fun!!