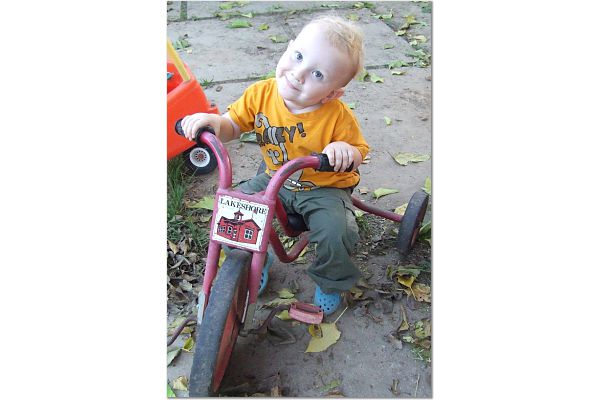 i just have to share what my darling 2yr old just did…i had gotten him a bowl of panda puffs, but didn’t yet get him the milk and spoon…so he took it upon himself…

he’s been talking up a storm lately…become quite the little chatterbox…even if some of the time we have to really work to figure out his words. he’s still not entirely clear on pronouncing things but he has the ability now to say full sentences (well full for him) and express himself quite well! its amusing to us every day! just could eat him up!

and he’s the cheeriest and most caring little 2 yr old i know! anyone gets hurt and he’s immediately “you otay??” and giving hugs and kisses. and he’s always doing something silly to make us laugh. my little comedian. definitely taking after his dah-ee (daddy).

everywhere we go he charms people. unlike maeven, who still is quite shy with strangers…tyren tends to be a charmer. they are both sweet in their own ways…don’t get me wrong…my little girl is just friggin adorable too! LOL! i just wanted to toot my horn about tyren for a minute….everywhere we go everyone falls in love with him. not hard to do. people love to run their fingers through his curls. he’s finally got a head of hair and its quite curly! so cute!

tyren tends to be very smiley and happy. oh he still drives me nuts with tantrums and incessant requests to nurse and not doing what i want him to do…he IS 2, afterall! but i have to say his personality more often then not is cheery and friendly. he says “he-wo” (hello) to most everyone we see. runs and gives hugs and kisses when daddy or nana or bompa arrive. and he is such a little helper. he actually tends to pick up after himself!! what a shock! he tears through the house, but then he will put stuff away sometimes too and if i ask him to help, he usually does! shocks the hell outta me!

my little imp! this is a very often seen look on his face.