from the time i got up yesterday morning…i worked on the homemade gifts…amid children fighting and me freaking on them to PLEASE stop fighting so Mommy can get all these projects done by the time Daddy gets home from work (which was supposed to be sometime after noon)…maeven spread her projects out over more time (she has been busy making up her own things for people for literally WEEKS! wrapping them all and carefully putting them all on her dresser…she was SO grown up about the whole thing!! and SOOOO proud!!! and i was proud of HER!) but the photo gifts i had to do most of the work for and i procrastinated…it was really that i was having a really hard figuring out exactly how to do it. i procrastinated getting the photos to walmart…which would have been cheaper then printing them myself, which i ended up doing (printing them myself). but really, it ended up that i really couldn’t have picked the photos and the sizes ahead of time. it was all trial and error. i figured it out, finally…by printing one sheet at a time (4X6 size) and seeing what worked where. i edited the hell outta my family’s pics and got some damn cute gifts to give, FINALLY, though.

i made photo bookmarks using this print:

which i printed on a 4X6 sheet of photo paper and cut in half. one half for one side, one half for the other…cut out strips of construction paper a bit longer than the photo strip (about the same width)…so maeven could personalize each bookmark…and laminated the whole thing! mighty nice looking bookmarks, if i do say so myself!!

i should note that this was my final version of the bookmark…initially i printed up sheets with tiny pics of my kids like this, (although i used a lot of the same pic over and over):

thought you’d prefer to see one that had all different pics, though, 🙂 actually this print is the one i printed up for the cover of each of the grandma’s photo calendars. purchased “my grandchildren” photo calendars that had space on each month, and the cover, for a 4X6 photo. maeven and i picked out our favorite pics of tyren and maeven together and i printed them all up and maeven taped them into the calendars. i made the cover by cropping around each of my kids’ heads in each picture that is in the calendar and putting them all together randomly in one image. really fun!! i think it looks really cute, don’t you? god i have a LOT of great pics of my kids!!

woops, got off topic…so initially i printed up pages of little pics of my kids cut them all out by hand, also some larger pics, mixed them all together, glued them with a glue stick onto the strip of paper i had cut out for the base of the bookmark…can you say TIME CONSUMING??

then i realized i could save myself a HELLUVA a lot of work if i just photoshop‘d the damn pics together to fit on one 4X6 piece of photo paper!! wow, the rest of the bookmarks were WAY EASIER to put together, LOL!

here’s the final product, being held by my kid brother, aka “uncle tim”: 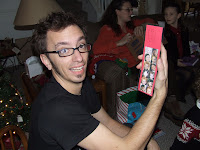 then i made photo pencil cups out of food cans: 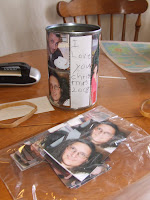 which ended up being a lot of work because i didn’t learn my lesson from the bookmarks. odd, but i didn’t figure out til i was partway into the 3rd and final photo pencil cup that i could have again photoshop’d the pics in a way to just glue the whole damn 4X6 (and part of another, because a 4X6 doesn’t fill the whole can…hey, i think i’ll buy 8X10 photo paper next time and measure the right size to fit the can completely and make a photoshop template that will perfectly wrap around the can!! VOILA!!)…anyway that’s not the way *I* did it though….NOOOOOO….i cut each pic out individually and glued them all by hand onto the cup.

did you know that photo paper immediately curls up once you put white glue on it? yup, and my 8yr old very quickly got so frustrated with the project (which i had assumed she’d do herself) and i quickly figured out that it was not within her patience level or manual dexterity to figure out how to get the photos glued onto the can with rubber bands to hold them down while the glue dried (without damaging the pics)…use a blow dryer to speed up the process and constantly press (VERY CAREFULLY so as not to smear the photo ink, which incidentally, maeven found out the hard way smears with too much glue on it) on the photo and smear (CAREFULLY) the glue around the edges to train the pics to lay flat against the can…anyway…….. it ended up being a big job. one which i thoroughly enjoyed doing, i might add…but a big job.

but they turned out GREAT! lookee!!: 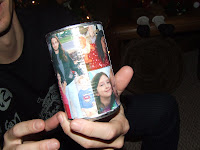 in fact i think i’ll make some more! gotta go get bigger photo paper. they looked really cool!! i used these pics for my father-in-law’s, because he has more family than my parents:

top half of the pic is my husband and me and our 2 kids, and the bottom half is adam’s sister (father-in-law’s younger child) and her husband, her 3 kids from previous marriage and the extra little cutie in the far right pic is the daughter of sis-in-law’s husband (previous relationship). so, aunt/uncle and cousins/cousin-in-law to my kids.

oh, and i made magnets too. forgot about those…i made them from this template:

i used photoshop to make these too….didn’t have the patience to get the circles just right…shoulda tweaked them more but they were good enough, and i just cut off the parts of the circles that stuck out a little…next time i’ll tweak it better.

i printed them on a 4X6 photo page and cut the circles out and glued them on a frozen juice lid, and glued a strong magnet to the back. i don’t know if the glue will hold though, because i couldn’t find our glue gun (which would have saved me a LOT of time and energy if i could have glue gunned it on!!!) so i had to use white glue. i’m not sure its strong enough, so next time i’m going to find the glue gun first. anyway i made those for family members too.

now, each one of these gifts probably doesn’t seem like much…although everyone seemed to like them…but i made a LOT of these things!! (to be precise, 3 photo cans, 6 magnets, and i think 8 bookmarks…within the span of like 36 hours) so i spent ALLLLLL day on xmas eve day working on those things (specifically the ones for adam’s family) til we ran out the door about 5pm, hours late, i might add, to sis-in-law’s to celebrate the day with hubby’s family for a few hours. amidst much stress and turmoil mostly caused by my kids, some caused by a house falling down around us and some friction between adam and i (more on these in another post). and then again today after we opened stockings and gifts…i spent the rest of the afternoon finishing MY family’s gifts…until we ran out the door (hours late, again) to go celebrate with MY family for a few hours.

all in all i think it all worked out fine. but DAMMIT, will i EVER learn to get these things done AHEAD OF TIME??? probably not. i also don’t know that i’ll go homemade every year. LOL! did it this year mainly because we were mostly broke most of the time prior to xmas. (things picked up just a few days ago! but i was already in for the long haul with the already planned homemade stuff.)

anyway, MERRY CHRISTMAS!! i am SOOOOOOOOO glad i’m done with all that but it was really a very merry christmas despite all the stress.

now adam has the next 10 days off (he’s maxed out on vacation time and we have a ton of stuff to do around the house so it was a good time for him to take off). and we have a house to clean the hell outta cuz it is WRECKED (in more ways than one) beyond belief right now…i couldn’t even think about keeping up with housework, not that i ever do, i just let it all go to get stuff DONE!